Our most popular Ladakh trips for those who want to visit all of the must do and must see places. Go camping or ride the double humped bactrian camel, hire a motorcycle and cross the mighty Khardung La or drive down to see some breathtaking monasteries. This trip offers you a variety of experiences and activities to make your week in Ladakh a memorable one. 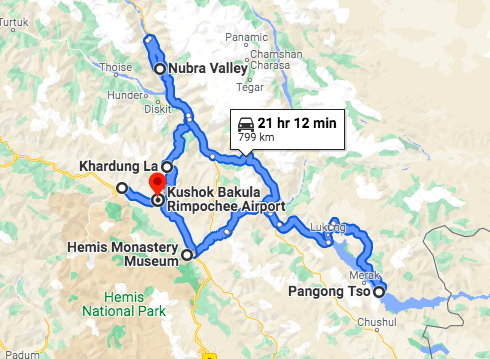 Begin your with a leisure breakfast before the 15-kilometre drive to Ladakh’s summer capital, Shey. Located on a hillock, Shey Palace and the Shey Monastery, seem unaffected by time since 1655 from afar. Upon closer look, the effects of time are clearly visible with the palace partly in ruins. The monastery however, still maintained with the same vigour as it was before the Dogras invaded in 1842. With the second largest statute of Buddha in the Ladakh region, the monastery’s main attraction is this 12-metre tall statue of Shakyamuni Buddha that occupies three floors.  A mere kilometre northeast is the now-famous Druk White Lotus School also known as the Rancho School. Renowned across India thanks to the Bollywood blockbuster ‘Three Idiots’.

Drive on to Thiksey monastery, about 4 kilometres away. One of Leh’s largest monasteries, there is a separate residential building for nuns as well. With fascinating wall paintings throughout the 12-storey complex, stupas, thangka paintings, statues and numerous artefacts make for a very interesting visit. The scenic last leg of the day takes you through the valley’s rugged terrain of over 25 kms from Thiksey to Hemis.  With stunning views of the mountains beyond with the contrast of green and purple against clear blue skies make for most of the scenery on the drive from Thiksey to Hemis.

Perched on a hill, nestled between mountains, Hemis is better known as India’s Shangri-La. The Cham mask dance is performed is in June-July for 2 days at this monastery.

A drive of nearly 48 kilometres from Leh town would take you to the point where the rivers Indus and Zanskar meet. The muddy waters of the Zanskar merge with the turquoise blue water of the Indus to flow westwards. Just before the Sangam, get up close and personal with the super-charged famed magnetic hill. Pay close attention as your car climbs up without any thrust on a seemingly uphill tarmac. After visiting the confluence we head back to Leh with a pit stop at the Gurdwara Patthar Sahib. Legend has it that a demon who terrorised the area, pushed a boulder onto Guru Nanak who had come to help – leaving a hollow impression of a person on the stone and the Guru unscathed. Discovered in the 1970’s while building a road, the boulder has now been placed in the gurdwara maintained by the Indian Army.

Our next stop, 15 kilometres away, is the Spituk Monastery. This lovely 11th century monastery overlooks Leh’s airstrip on one side and the gorgeous Indus river on the other. Home to about 100 monks, the monastery halls are adorned by ancient masks, beautiful thangka paintings, miniature chortens and idols. A little higher up is the Mahakal Temple with its veiled Vajrabhairava deity; witness the unveiling of the deity if you do visit in January for the festival.

We end this today with visit to the Hall of Fame. Constructed in memory of Indian soldiers who have lost their lives in the India-Pakistan wars, the memorial showcases information on the wars fought, the soldiers and their sacrifices, and displays the artillery used in the Kargil war.

After breakfast we begin the scenic drive to Nubra valley and the sand dunes of Hunger via Khardung La. One of the world’s highest motorable passes, Khardung-La is one of Ladakh’s most popular destinations. A couple of lovely photographs later on K-top, we start out descent to Nubra Valley.

The drive will get relatively more comfortable after North Pullu with better roads as the valley opens up. Make your way towards the spectacular Diskit Monastery while crossing through the quaint Khardung village.

Check-in to your camp in Hundar village and relax for a bit. We will have to make our last visit of the day about 7 kilometres to the sand dunes of Hundar. Get to see and ride the fascinating two-humped Bactrian camels in the sand dunes. The impressive views of the grey dunes, the glacial river and the rugged snow-capped mountain peaks set Hunder in a league of its own here. Hundar, apart from housing the mandatory monastery is a charming little village with several shrines higher up. Spend the night here admiring the starts in a cloudless sky.

After an easy morning, we head to Pangong Tso. You can chose to spend some more time at the sand dunes before getting on the road. The road to Pangong goes along the River Shyok, and connects to the Pangong basin via Shyok village.

A quick stop at Agham village to see the prehistoric petroglyphs.

Stop at Hemis Monastery. Perched on a hill, nestled between mountains, Hemis is better known as India’s Shangri-La. Founded in 1672, Hemis monastery is said to have existed before the 11th century. The Cham mask dance is performed is in June-July for 2 days at this monastery.

Get ready to leave with a heavy heart as you board your flight back to the plains. Picturesque views and memories of Ladakh will keep fresh in your memory for the next few week

*Accommodation for all the 6 nights on twin/double sharing basis

*2 meals on each day (breakfast and dinner) at the hotel

*Snacks and beverages (except the ones with meals)

*Flight/train/bus tickets to or back from Leh