Explore Ladakh with our 4n/5d trip. Visit the famous Khardung La and Pangong Tso and popular attractions around Leh.

A short trip to Ladakh for those with a limited travel time. Explore Khardung La and Pangong Tso and visit all the main and popular attraction around Leh town. Delve into the architecture and culture of the place or go on a thrilling bike ride to one of the highest passes in the world. 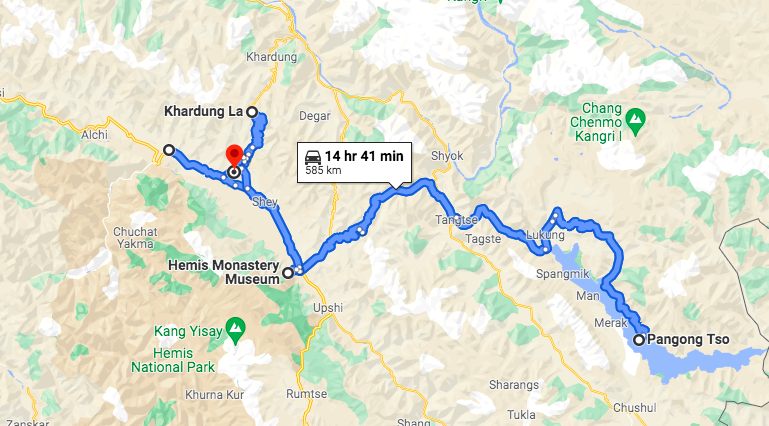 Get ready for an unforgettable drive to Khardung La after breakfast. One of the world’s highest motorable passes, Khardung-La is one of Ladakh’s most popular destinations. The gateway to Nubra Valley and Siachen glacier, paved roads from Leh town to South Pullu checkpoint become gravel and dirt for the last 15 kms or so. Staying hydrated goes a long way as you reach dizzying heights from 3500 metres to over 5300 metres in just a couple of hours. Crisp mountain air greets you as you step out on top of the pass. Walk around for enchanting views of the valleys around Ladakh if you’re lucky enough to be visiting on a clear day. Your visit to the top won’t be longer than 20 minutes, as acute mountain sickness (AMS) could kick in owning to the altitude. Roads here are unpredictable and the weather and other elements can cause unprecedented delays, but you should be back in Leh in time for lunch. After a sumptuous lunch, we head to the confluence of the Indus and Zanskar rivers.

A drive of nearly 48 kilometres from Leh town would take you to the point where the rivers Indus and Zanskar meet. The muddy waters of the Zanskar merge with the turquoise blue water of the Indus to flow westwards. Just before the Sangam, get up close and personal with the super-charged famed magnetic hill. Pay close attention as your car climbs up without any thrust on a seemingly uphill tarmac. After visiting the confluence we head back to Leh with a pit stop at the Gurdwara Patthar Sahib. Legend has it that a demon who terrorised the area, pushed a boulder onto Guru Nanak who had come to help – leaving a hollow impression of a person on the stone and the Guru unscathed. Discovered in the 1970’s while building a road, the boulder has now been placed in the gurdwara maintained by the Indian Army.

Stop by Ladakh’s summer capital, Shey Palace on your way to Pangong Tso. Located on a hillock, Shey Palace and the Shey Monastery, seem unaffected by time since 1655 from afar. Upon closer look, the effects of time are clearly visible with the palace partly in ruins. The monastery’s main attraction is this 12-metre tall statue of Shakyamuni Buddha that occupies three floors. This is the second largest statute of Buddha in the Ladakh region. Next we visit the Thiksey monastery. With fascinating art across the 12 storey complex, stupas, thangka paintings, statues and numerous artefacts make for a very interesting visit.

Moving ahead, we take a break and stop for a hot lunch at Karu before beginning the next leg of the journey to Pangong. Pass through charming hamlets and picturesque open stretches before the steep ascent to Chang La pass. A couple of kilometres down, you find green pastures with yaks and sheep grazing alongside the road besides small streams.

Day 4 – Drive back to Leh; Visit Hemis monastery on the way

Stop at Hemis Monastery. Perched on a hill, nestled between mountains, Hemis is better known as India’s Shangri-La. Founded in 1672, Hemis monastery is said to have existed before the 11th century. Hemis was made famous by claims in the late 19th century by a Russian journalist, Nicolas Notovitch, that the library contained works on Jesus Christ’s lost years (this was proven to be false). The Cham mask dance is performed is in June-July for 2 days at this monastery.

Get ready to leave with a heavy heart as you board your flight back to the plains. Picturesque views and memories of Ladakh will keep fresh in your memory for the next few weeks.

• Accommodation for all the 4 nights on twin/double sharing basis

• 2 meals on each day (breakfast and dinner) at the hotel

* Snacks and beverages (except the ones with meals)

* Flight/train/bus tickets to or back from Leh