Explore Ladakh with our 8n/9d trip. Visit some popular and hidden gems in the valleys of Ladakh.

A trip that lets you explore the popular and must see places along with some hidden gems. Visit places like Lamayuru, Khardung La, Hundar, Nubra, Alchi, Sangam and Pangong Tso. Go on a bike ride to Ktop or ride the famous double humped bactrian camel. Customise your travel to suit your requirements. 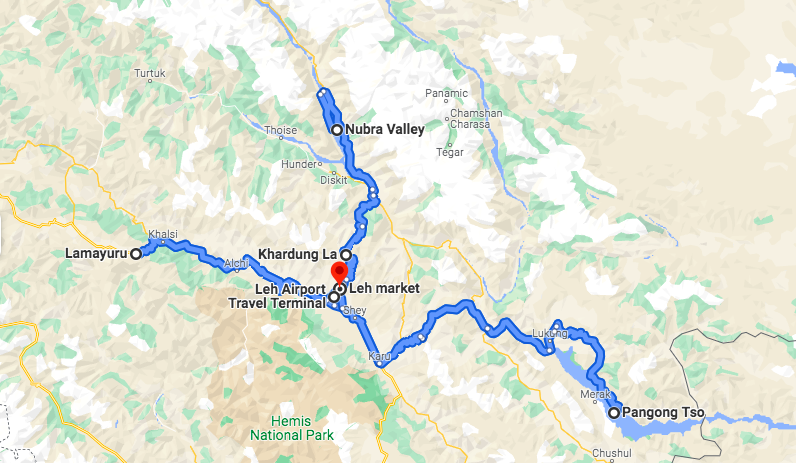 Day 2 – Leh to Lamayuru via Alchi and Likir

An early morning drive to Alchi Gompa and Likir Gompa, some of the oldest monasteries of the region. Watch the turquoise waters of the Indus meet the muddy waters of Zanskar at the sangam. Spend the night at what is called the moonland of Lamayuru.

Leave Lamayuru and take the road back to Leh. Visit the solitary Rizong Gompa and the Basgo Monastery a little further ahead. Admire the original murals here that date back to the 16th century. Reach Leh and rest for the night.

After breakfast we begin the scenic drive to Nubra valley and the sand dunes of Hunger via Khardung La. One of the world’s highest motorable passes, Khardung-La is one of Ladakh’s most popular destinations. A couple of lovely photographs later on K-top, we start our descent to Nubra Valley.

The drive will get relatively more comfortable after North Pullu with better roads as the valley opens up. Make your way towards the spectacular Diskit Monastery while crossing through the quaint Khardung village.

Check-in to your camp in Hundar village and relax for a bit. We will have to make our last visit of the day about 7 kilometres to the sand dunes of Hundar. Get to see and ride the fascinating two-humped Bactrian camels in the sand dunes. The impressive views of the grey dunes, the glacial river and the rugged snow-capped mountain peaks set Hunder in a league of its own here. Hundar, apart from housing the mandatory monastery is a charming little village with several shrines higher up. Spend the night here admiring the starts in a cloudless sky

Day 5 – Nubra Valley (Hundar) to Turtuk and back

Take a morning drive from Hundar to Turtuk alongside the Shyok river. The residents of this last village of India speak the interesting Balti language that uses old Tibetan sounds no longer used in modern Tibetan. Drive back to Hundar for the night.

After an easy morning, we head to Pangong Tso. You can chose to spend some more time at the sand dunes before getting on the road. The road to Pangong goes along the River Shyok, and connects to the Pangong basin via Shyok village.

A quick stop at Agham village to see the prehistoric petroglyphs.

Spend the day at Pangong Tso in Maan. While at Maan, hike from Maan to Merak and back. If time permits, a horse ride on the campus around the camps can be arranged.

Stop at Hemis Monastery. Perched on a hill, nestled between mountains, Hemis is better known as India’s Shangri-La. Founded in 1672, Hemis monastery is said to have existed before the 11th century. The Cham mask dance is performed is in June-July for 2 days at this monastery.

Get ready to leave with a heavy heart as you board your flight back to the plains. Picturesque views and memories of Ladakh will keep fresh in your memory for the next few week

• Accommodation for all the 8 nights on twin/double sharing basis

• 2 meals on each day (breakfast and dinner) at the hotel

• One activity at Pangong Tso

* Snacks and beverages (except the ones with meals)

* Flight/train/bus tickets to or back from Leh